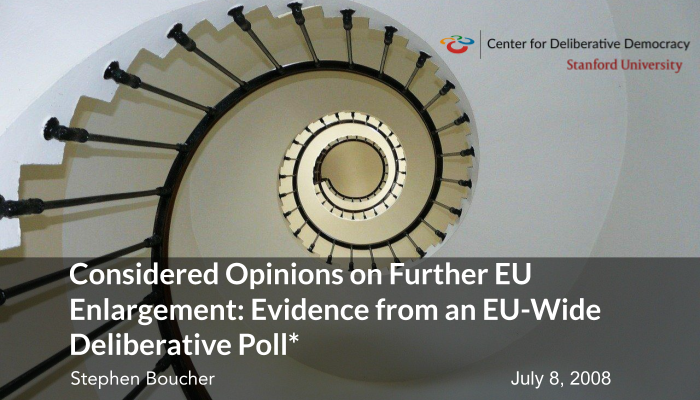 *An earlier version of this paper was prepared for presentation at the annual meeting of the International Society of Political Psychology, Paris, France, July 9-12, 2008.

Initially published by the Center for Deliberative Democracy (Stanford University)

In October 2007, the first EU-wide, indeed the first transnational, Deliberative Poll®, called Tomorrow’s Europe, gathered a random sample of 362 citizens from all 27 EU member states to the European Parliament building in Brussels, where they spent a weekend deliberating about a variety of social, economic, and foreign policy issues affecting the European Union and its member states. The deliberation, in a total of 23 languages, with simultaneous translation, alternated between small group discussion led by trained moderators and plenary question-and-answer sessions with leading policy experts and prominent politicians. The participants’ were queried about their views on first contact, before being invited to the deliberative weekend, again on arrival, and again, finally, at the end. (For more on the method and the rationale, see Fishkin 1997; Luskin, Fishkin, and Jowell 2002.)

The object, as always in Deliberative Polling, was to estimate what the public would think about the issues if it thought, knew, and talked much more about them and how that would differ from what they currently think about them (what ordinary polls measure). This Deliberative Poll, however, was unprecedented in bringing together a random sample from all the EU’s member states. The public whose views were being measured was not that of Germany, France, the U.K., or any other single member state but of the whole EU.

The issues deliberated included what the EU should do to preserve its pension systems, what role it should play in the world, how it can remain competitive in an increasingly global economy, and what if anything it should do about admitting additional member states. The results shed light on deliberation’s effects on all these issues. They also shed light on the possibilities of creating a European public sphere and on deliberation’s effects on mutual respect across national boundaries.