Democratic collapse is near: how to avoid it 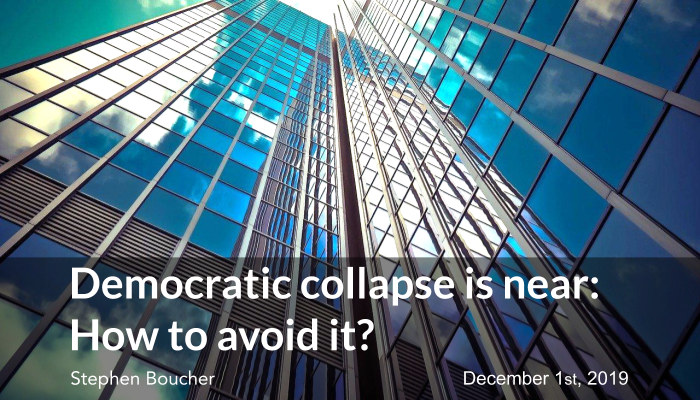 Grand Débat National, French citizens’ convention on ecology, permanent citizen assembly associated with the parliament of the German-speaking Belgian Community, recent citizens’ assembly in Ireland: the dialogue between citizens and decision-makers is making progress. Will this be enough though to restore the legitimacy of our democracies?

The call for more “citizen participation” has been heard. However, the urgency of the matter does not seem to be fully understood, nor its full implications.

Democratic collapse is not far

According to Harvard political scientist Yascha Mounk, the indicators of democratic health have all turned red in recent years, announcing a possible collapse of our democracies. Much like a medical test, Mounk’s analysis combines three criteria: how much do citizens value democracy in their own country? Are they open to undemocratic forms of government? And are “anti-system” parties and movements gaining ground?

These three indicators are today announcing a possible “deconsolidation,” as Mounk calls it, even in countries that are in principle as democratically sound as Sweden or Great Britain. As we’ve seen with Venezuela or Hungary recently, the slow erosion of democratic health documented over the last 15 years can suddenly lead to much faster deterioration.

People’s dissatisfaction with democracy is in fact global, as stressed by the latest Global Values ​​Survey. The appeal of undemocratic alternatives – autocracy, rule of experts, military rule… – is on the rise. In France, no less than 17% of the population is tempted by a military regime. And we’ve seen the recent success of populist parties at the ballot box.

According to this same survey, the only alternative that attracts citizens more than undemocratic alternatives is that of more direct democracy. Anger and distrust are turning into a desire for more direct control (see the call for a Citizen Initiative Referendum in France). At least for the moment, and for part of the electorate…

The Economist Intelligence Unit latest Democracy Index underscores in fact how the erosion of democracy has only been offset recently by people’s greater involvement in politics. Such appetite is therefore already a factor in rebuilding democracy. It must however also lead to better outcomes.

The openness of the political system to external contributions must be designed to help our democracies prove that they can do better than any other decision-making mechanism to fulfill the general interest, especially in the face of “illiberal democrats” and China’s active counter propaganda.

Such legitimacy must be regained on three fronts: process, impact and emotions.

In order to (re)gain more emotional legitimacy, democracy and citizen participation must be founded on the deep and positive aspirations of the population. En Marche, Podemos or Mr Obama did this well in their electoral campaigns. But such emotional intelligence can no longer be the preserve of the campaign trail.