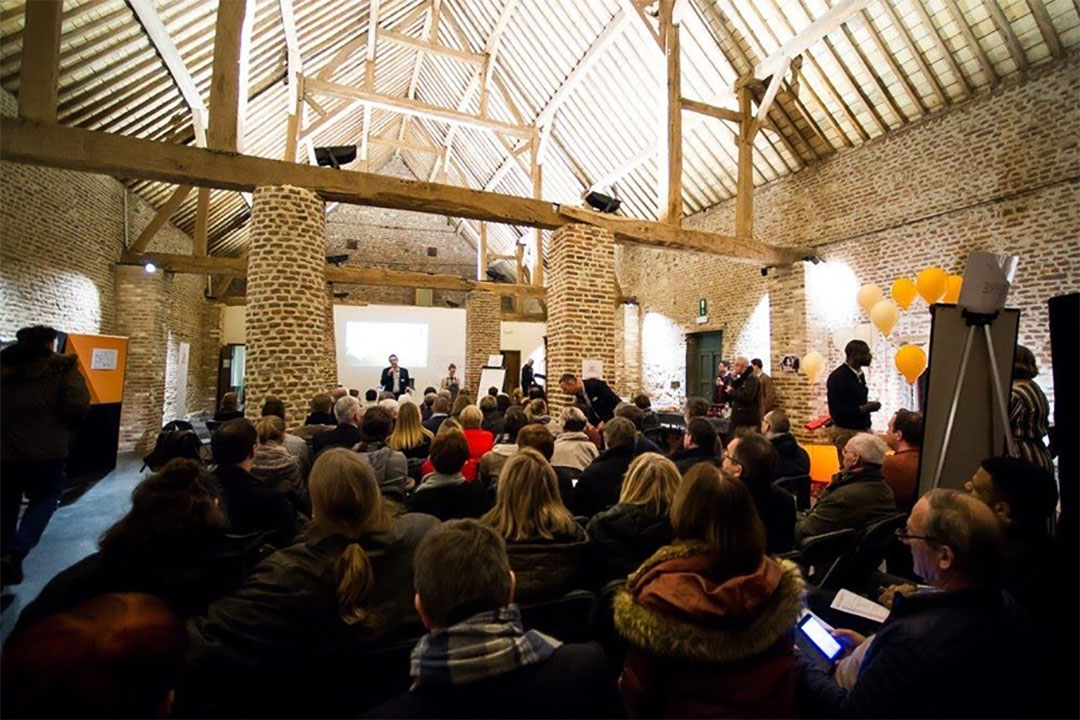 © Dphotography – Introductory session at the Dream Party in Éghezée on March 9, 2020

The Permanent Center for Citizenship and Participation (CPCP) aims to promote an active and participatory citizenship, conceiving citizenship as a concept that goes far beyond a legal status, but includes an informed, critical and committed attitude. Concretely, the CPCP divides its work into five main themes: “Family, culture and education”, “Living spaces and public space”, “Media and citizen actions” and “Sustainable consumption”. In addition, there is the transversal theme “Citizenship and participation”. The members of the CPCP are divided into four poles: Continuing Education, Training, Research and Advocacy and Participation/Animation.

The distance between decision-makers and citizens, the loss of effectiveness of public action and even the extreme polarization of debates are causing dismay towards politics in the eyes of citizens. This mistrust fuels the rise of populism. In order to better address the growing crisis of confidence between citizens and the political system, different frameworks for more inclusive and participatory debates have emerged in recent years.

Designed by Dreamocracy as part of the Il Fera Beau Demain process. “Il fera beau demain” (IFBD) is part of the refoundation of a political party, the cdH, which, after having recorded several electoral defeats, wishes to reinvent its political offer through a participative process. The Dream Parties were decentralized launch parties for the “Il Fera Beau Demain” process.

Dream Parties were facilitated by CPCP employees from February to March 2020 as part of participatory evenings. To quote its designer, Stephen Boucher, “Dream Parties allow everyone to express themselves without the need to think about what each proposal implies. In short, a Dream Party is a citizen dialogue format designed to allow participants to let their imaginations run wild in a joyful way in order to draw concerted conclusions.

Dream Parties for Citizen Vision – How it works

The objective of the Dream Parties, in this case, was to spark common dreams and concrete ideas, as well as to inspire local debates organized according to living areas in the whole territory of the Wallonia-Brussels Federation. In all, seven Dream Parties were held before confinements and health precautions slowed down their deployment: one in Brussels, with the rest taking place in Wallonia in order to reach each province.

The facilitation tool for these Dream Parties is inspired by a well-known format of Collective Intelligence methodologies called the “fish bowl”. Indeed, the configuration of concentric circles of chairs without tables guarantees equality between participants. In the classic “fish bowl”, each person wishing to speak must move around the inner circle, leaving a seat free at all times. During the Dream Party, the participants successively took on the roles of “dreamers” and “decoders” and were able to express themselves during two 20-minute rounds. 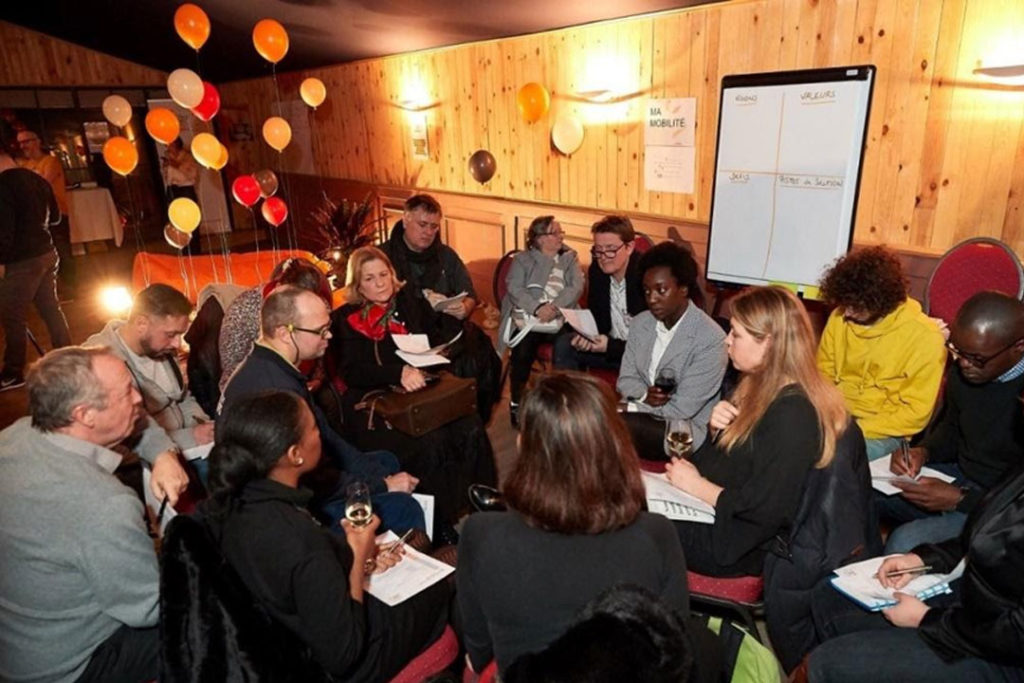 © Dphotography
Discussion between “dreamers” (center) and “decoders” (second circle) during the Dream Party in Jette, February 4, 2020

Taking turns, “dreamers” share their daily lives and imagine how they could be improved in relation to the theme discussed and “decoders” write down what they like about those future visions.

After deliberating, subgroups vote on the group’s preferences for the “vision” and “values” categories. Finally, each subgroup’s rapporteur briefly explains the outcome of the deliberation in plenary by presenting three main “visions”, three main “values” and the proposed actions. In order to compile what comes out of the Dream Parties, the organizing team keeps some material traces such as the emotion chart that illustrates the states of mind before and after the event. In addition to a report, written live by “scribes”, decoder and reporter cards are kept so that they can be quoted.

The emergence of ideas leads to a wealth of proposals, often original, which are treated equally regardless of the speaker. This is in contrast to “classic debates”, where exchanges are often unbalanced by the eloquence of a speaker, their expertise, but also their cultural capital, which can create real inequality in the exchange and prevent co-construction. During Dream Parties the common objective, beyond the differences between each participant, is the emergence of ideas rather than the confrontation of participants.

Ideation, balanced dialogue: the dream party method has proven itself

Dream Parties are a real legitimate tool adapted to the challenges of our contemporary democracies, designed to:

More than ever, collective intelligence enables people to meet and, by overcoming divisions and prejudices, every citizen to be a collective actor of change.

To regain greater emotions legitimacy, democracy and citizen participation must be based on the deep and positive aspirations of the population.This emotional intelligence cannot be limited to election campaigns; In order to overcome the crisis of confidence of citizens towards politics and to further involve citizens in decision making, collective intelligence tools can provide a solution to reinvent debates.

Dream Parties have the merit to help any citizen facing a problem in imagining and co-constructing a long-term vision, but also in finding solutions. Dream Parties also contribute to reducing the gap that has emerged between citizens and politics, that is to say, public issues and elected representatives.

Jean-Louis Hanff, a collaborator in the CPCP’s Participation Unit, describes the Dream Parties in more detail in this publication, available here.

Pauline specializes in advocacy, governance, and change management. After about 10 years in the Brussels’ EU bubble – mostly working on environmental and sustainability issues – she took a break that led her to the southwest of Madagascar where she first did voluntary community work for a British marine conservation NGO. It was love at first sight and she was offered a full-time coordinating position for two years on the ground. The experience was life changing and confirmed that collective intelligence should be the beating heart of any attempt to understand and address the complexity of the challenges our societies face. A passionate advocate of people’s intelligence and ability to change, Pauline has settled in Antananarivo and provides counsel in governance and advocacy, based on collective intelligence methods and tools.

Caroline R. Cullière has over 10 years experience as an accomplished ‘launcher’, working in both the profit and non-profit sectors, leading operations, general strategy and implementation methodologies to improve team performance in complex environments. She is an expert in entrepreneurship, innovation, business growth, negotiation, and crisis management.

She has launched
different successful
startups :

Caroline is also an experienced campaigner and local policy catalyst, with particular expertise in French and Middle East politics. She launched Agora, a Citizen engagement tool. She is a Diplomat member of the Jewish Diplomatic Corps, World Jewish Congress, working with permanent delegations to UNESCO on the Anti-Semitic problem, interfaith dialogues, and Israël advocacy. She is also a German Marshall Fund Transatlantic Inclusion Leaders Network Alumni ‘19.

Graduated from ESSEC Business School and from Tel Aviv University with a MA in Public Policy, she owns a certificate in counter-terrorism from Leiden University and is a certified mediator.

She is currently the [Innovation & Development Director] at Dreamocracy.

We use cookies to ensure that we give you the best experience on our website. If you continue to use this site we will assume that you are happy with it.Ok