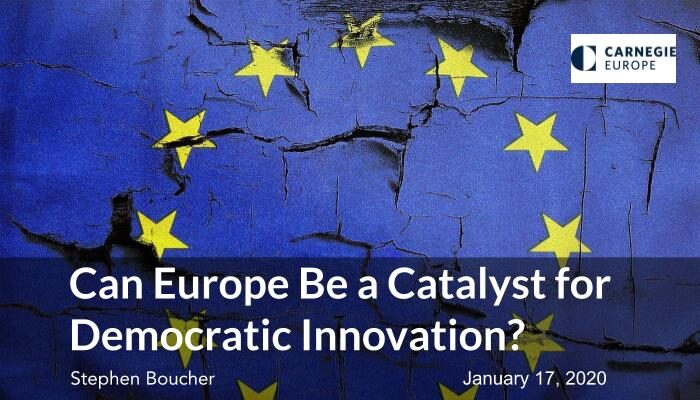 20
Jan
Originally published by Carnegie Europe
The EU could benefit from tapping into the smart ideas behind its many successful local projects, and then adapting them to benefit other member states.

Improving EU democracy is high on the agenda at the upcoming Conference on the Future of Europe, a two-year consultation proposed by the president of the European Commission Ursula von der Leyen. Will the radical reforms needed to improve European democracy really be on the table, given the forcefulness of those attacking them?

When debating democratic reform in Europe, it is important to keep in mind three benchmarks of success. First, public decisionmaking processes must address society’s challenges more effectively and inclusively. Second, democratic institutions should be redesigned to encourage political innovation. Finally, any new measures, experiments, policies, or rules that have been proven to work should move swiftly through the political system and be put into practice.

At present this does not happen much. Indeed, the EU institutional system more often acts as a barrier to the spread of good ideas than as an enabler of policy innovation. In contrast, many approaches have made an impact at a local level across Europe: for example, initiatives like Greece’s SynAthina digital platform for citizen initiatives; the Finnish Kokeilun Paikka (“place of experiment”), which offers funding for problem-solving ideas; the Territoires Zéro Chômeurs de Longue Durée jobs program in France; and the British “What Works Network,” aimed at improving public services. But these have not been picked up and adapted further afield.