How Citizens Can Hack EU Democracy 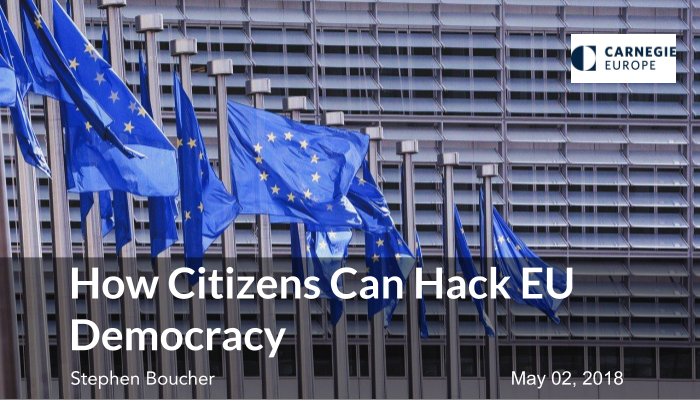 This article is part of the Reshaping European Democracy project, an initiative of Carnegie’s Democracy, Conflict, and Governance Program and Carnegie Europe.

Buried in the millions of webpages informing citizens of the European Commission’s activities is a single page entitled “Have your say on EU policies.”1 Citizens need clear paths to engagement if they are to have a real say and meaningful influence over the future of the European Union—and yet this particular path, however useful for democratic accountability, is so deeply hidden that it may as well be a proverbial needle in a haystack. Whatever the analytical debates over Europe’s democratic deficiencies, citizens certainly feel that EU decisionmaking is remote and often impenetrable. Unless some tangible and high-profile initiatives are forthcoming, the EU will remain more remote and complex for the average citizen than public authorities closer to home. Busy citizens will not engage with broader European politics unless they feel that their voices have a good chance of being heard.