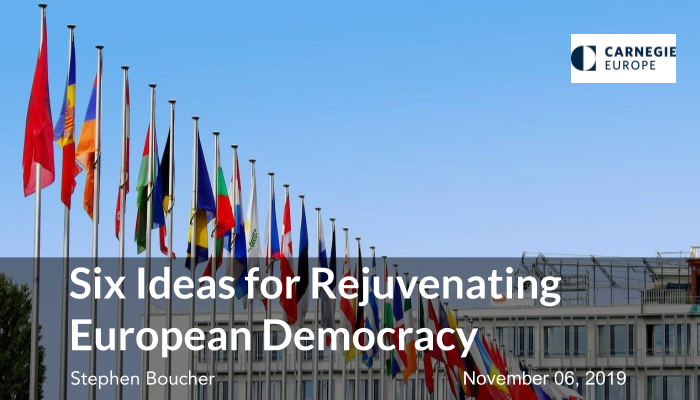 The European Commission’s new president should act decisively to make deliberations in Brussels more accountable to voters and national parliaments.

This publication is part of the Reshaping European Democracy project, an initiative of Carnegie’s Democracy, Conflict, and Governance Program and European Movement International.

In recent years some European states have suffered dramatic regression, while others have experienced more subtle forms of democratic erosion. Several EU governments have constricted civic liberties. There has been lively debate about how much European citizens are losing faith in core democratic values. In general, the demand for democratic participation is outstripping its supply at both the national and EU levels.1

In response to this challenge, new European Commission President Ursula von der Leyen has called for a “new push for European democracy.” She has suggested organizing a Conference on the Future of Europe in which European citizens will “play a leading and active part.” She has promised to formulate a new European Democracy Action Plan focused in particular on the digital sphere.2 The new commission’s promise opens new opportunities for democratic innovation and experimentation. European leaders frequently commit to defending and deepening democracy, but they rarely follow through amid more urgent crises. EU and national authorities seem to recognize the importance of this endeavor, yet improving democracy often appears to be a more abstract and lower-priority goal than fixing the euro, agreeing on migrant quotas, or negotiating the budget.